Big Titties In A Dirty Bra

You're gainfully employed in a horrible economy, but it's in a job you despise, one that steals your soul and make you wish you were dead. Your in-laws will watch your kids anytime you want, for as long as you need without complaint, but they feed your kids bacon and candy non-stop. You are as physically and mentally fit as you've ever been in your life, but tomorrow you're being shipped to Afghanistan to chase boogeymen. This is where I am in my life. I picked up a girl with big titties, but she's wearing a dirty bra. Not literally, follow me for a sec.

It's the mixed blessing thing. I've got a beautiful wife, but I only see her on weekends. I've got a stable job, but I feel like jumping off a gotdamn roof every time I have to walk into my office. I'm healthy and sharp, and I'm wasting in Satan's Anus, the capitol of Backwoods/Jerkwater, Michigan. I feel like I'm incapable of being happy, but that's not the case. I'm incapable of faking it. I have been and can be happy, but I know better than to settle for it, like this shit is as good as it gets. Yeah, everybody has problems, but I know there's a possibility, even with all the other problems in the world, real, attainable happiness is within my reach. Now, if I can only get that bra to landromat...

I understand how I'm supposed to feel and how I've been told to feel, but Imma hafta say it. Fuck Skip Gates. That's right I said it.

Police, by and large, are dickheads and assholes. They are some of the worst fucking human beings with some of the most outsized egos going. EVERYBODY knows that shit. EV-RY-BOD-EEE. I know Harvard makes you feel like you're King Dick and shit, but truth be told, it took your dumb ass 58 years to learn what we all know, don't press your fucking luck with an obviously insecure, undereducated glorified security guard. You will lose. You won't win. You may win in the long term, but short term, he'll use all of his "power", which at that point is a gun and the ability to arrest you, to make your life miserable. Your "power" may win out in the end, but he's got your ass in the now. Every fucking African I know knows that, and I know some stupid muthafuckas.

I get it. You're SUPPOSED to be equal, and be treated better than your run of the mill African. The reality of the situation is that there is a history of Black men and police officers in this country. When the fuck have you ever been able to tell a police officer anywhere in the gotdamn world "Do you know who I am?", or any variation of that sentiment, and be let go? To arrest a "prominent" man is to get a feather in his cap, at least temporarily, from superiors. That shows that we don't play favorites in this department. Black celebrities or whatever are not exempt from this.

I know we're supposed to have made it, this being the Age of Obama and all, but I fucking know better. Most of us know better. Skip should too.

The Blast I Had

Hello all! I've been back in Satan's Anus for about 2 days now, and I'm so ready to leave again. I had a great time on vacation in Florida. I visited my parents in Tampa, which is almost never fun, went to Disney World for the first time since I was 8, and I drove to Miami with my wife, my brother and my brother in law to kick it with my cousin and my play cousin. That's right, I said it. Play cousin.

Anyway, the part of the trip I want to talk about is the Miami leg. This time I didn't get my pocket picked, but in many ways it was much worse. Going to see my cousin Juan was one of the most infuriating things I've done in awhile. Juan is my older cousin, he's about 8 years older than me. I used to look up to him. He was born and raised in Tampa, and came to live in Detroit after college, when I was about 12. He was like a second brother. I'd glossed over some irritating habits he had, like extreme frugality, because he'd always been alright with me.

Man, this dude is a f*cking trip. He's hit a lick since he moved to Miami. Juan is married to a chick now that makes money in bunches. He loves the trappings of her loot. The house, the cars, the atmosphere, everything. But he's still cheap. He made it a point to basically beg me and my other relatives to come down and see how he's living, so he could flex about how live he is. It bugged the shit out of me. I tried to be happy for him, I really did, but I don't like bragging motherfuckers. Call me a hater, but I'm not gonna listen to you ride your own dick for too long.

The thing about him is, he loves those trappings of success, but he's still a cheapskate at heart. He promised he was going to set it out for us. My hand to God, TAD is my witness, this African called his boy, a upscale chef, to come to his house and fry fish and shrimp in a gotdamn Frybaby and was like "What n*gga? My boy is a chef and he's doing it big up in here." Like we were supposed to be impressed by that shit. I understand his boy's high falutin' credentials, but shit, it's still dropping fucking fish in a fry-o-lator. Juan was gonna put us on to some shit, so he bought some Hennessy White. A single fifth. For about 8 people to share. That's a baller for you.

My play cousin showed up and was instantly more fun than my actual cousin. My play cousin, Chief, has an interesting story. He's my brother's age and grew up with him in the D. Our parents all grew up together in Tampa and moved to Detroit in the 60's. He's like family, but not family. When Chief graduated from high school back in 1980, he was determined to be a MC. Think about that. Hip hop basically hit the scene in 1979 and in 1980 Chief decided he was gonna be down. He toiled and made demos, joined a group, did local gigs, and tried. He eventually moved to the NYC in '84 or '85 and stayed up and down the east coast pursuing his dream. He met some interesting people, some of whom made it, but most of them didn't. One of his former roommates, and close friend to this day, is DJ Jazzy Jeff. Incidentally, Jazzy Jeff had a gig the next day and Chief was putting us on the VIP list. That would be the highlight of the trip.

After the fish and shrimp, he had us parking lot pimpin' a John Legend concert. He told us about the concert before we came as part of his weekend activities for us, then he PARKING LOT PIMPED IT, like we were gotdamn teenagers. With my wife. What the fuck? We would have bought our own tickets for the concert, all he had to do was get us there. But he thought it would be more fun for us if we stood outside and watched people walk out. Asshole!

The next day, he took us out to sightsee. Though me and my brother in law drove separately in Ford Explorers with third row seats, my cousin insisted that the five of us big muthafuckers ride in his Lexus sedan. Why? There was no discernable reason for his insistence other than he wanted to ride around in style while the rest of us were uncomfortable smashed in the backseat.

In spite of the fact that he lives adjacent to Ft. Lauderdale and north of Miami, this ass took us driving around looking at the gated communities that famous people live in near him. Nobody was interested in that shit, but he had to show us that he was in proximity to greatness. Mind you, we couldn't actually see the houses because we couldn't get through the gates. He was pointing to shit that we could theoretically see if we were permitted through the gates. Who the fuck is that fun for? We were all aching in that car, so to give us a chance to stretch our legs, he finally drove us to Miami. Finally!

Where did he take us exactly. The racetrack. Not the gotdamn beach, not shopping, but to the horse track. Free admission is hard to pass up.

After we finally escaped back to his house, we got ready for the Jazzy Jeff gig. TAD was meeting up with her girls, who came down to Miami for their annual girls' trip, and was essentially the entire reason we scheduled the side trip to Miami. While she was kicking it with them, I was gonna be on Ocean Drive with my family. Then we'd meet back up with TAD to go see Jazzy Jeff.

My baller cousin once again amazed me. Juan had to show us how he was setting it out for us, so he was gonna treat us to dinner. If you've ever been on South Beach, you know the amazing restaurants they have. If you haven't been, you probably could imagine how it is. I'm not a vagrant. I'm not rich by any means, but I'm not a pauper. I like nice things sometimes and would like to enjoy myself on vacation. That being said, of all the restaurants on South Beach, of all the various cuisines we had to choose from, ballerific Juan insisted that he take us to the corner of 5th and Ocean to fucking T.G.I. Friday's, his treat. I'm trying not to rock the boat, because at this point I'm the only one of my relatives that's pissed, so I settle down and order the salmon pasta, because lord knows that on Ocean Drive, Friday's has the freshest seafood.

I couldn't get to the Jazzy Jeff show fast enough. We reconnected with my wife, who incidentally had a great meal with her girls at Lario's Cuban Cuisine, slipped through the backdoor at Club Mansion and sat on the stage with Jazzy Jeff on couches with free liquor while he spun the room into a frenzy. 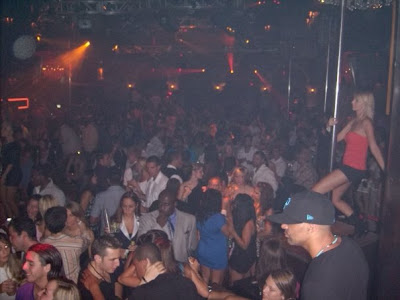 I got to meet a hip hop luminary that night, that's the only story that matters. Everything else was exposition.