A word of advice: If you're not going to raise your kids, please drown them in a fucking bathtub before they kill mine. 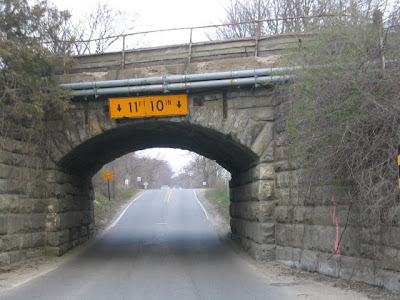 So, I'm moving right? Second weekend in a row. First my stuff from Satan's Anus, then her stuff from the D. This weekend was the stuff from the D. All's well. Our team, after initially flaking out, comes together and the move is swift. Even though we lost the keys for about 40 minutes in the D, the move was still a rousing success. Now to get the stuff from point A to point B. I got the personnel and I got the will. No biggie, right? 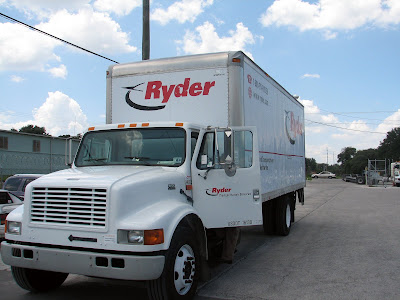 Remember having sex as a virgin?

When I tried to get this truck through that hole, it got stuck. The only road to get in and out of the village was clogged by the town's new black guy and his fucking moving truck. For an hour and a half.

So after paying the tow truck driver to wench me out, and getting the citation from the Fidget (fucking midget) for "ignoring a traffic control device", and filling up the gotdamn gigantic gas tank with diesel and the cost of renting the fucking truck, it would have been cheaper to hire movers and have me and TAD sipping Pina Coladas in our new digs waiting for our furniture to come.

I was a gotdamn newsstory, a one day oddity in the village. And a story to tell my kids.

Email ThisBlogThis!Share to TwitterShare to FacebookShare to Pinterest
Labels: moving

Doubt is a powerful thing. I doubt myself all the time, usually in matters that aren't important, but they still take up a lot of my time. For instance, when I'm in a meeting, I quite often start to daydream. My mind drifts and I think of everything except the reason we've been assembled. When I'm shaken from my daze, usually by someone asking what I think about the subject matter, I give some vague answer. The thing is, because I'm disengaged I think that I'll have a wrong or misinformed answer. I doubt myself, but most of the time I enter the meeting with a pre-determined set of actions and alternatives because the meeting is not necessary. Rarely do I respond with the pre-determined actions, I always give the vague, bullshit answer. Why? Because I think that the people who have spent a lot of time discussing and hashing out things have a better handle on them than I do. 99.9% of the time, I'm wrong about that. I could have come into the meeting with the solution. I let doubt take over because really that's my comfort zone.

I'm asked to speak at a dizzying number of places in Satan's Anus and I reluctantly accept. I used to hem and haw my way through the speech, hoping to reach the end and mercifully sit down or leave. The one thing I never counted on until recently is the doubt in the majority of the audience. Give me a mike and some notes, and all of a sudden I become the expert. You might have a different opinion or a different set of facts, but I got the mike bitch! Subverting my self-doubt and replacing it with arrogance and an embrace of the inherent power of standing before a crowd and imposing your own knowledge has been a revelation.

I leave my doubt for my personal life. I've abandoned it as a profession. It took me long enough, but I'm there.

Email ThisBlogThis!Share to TwitterShare to FacebookShare to Pinterest
Labels: work

Real Shit That I Saw In Baltimore Yesterday