Alright, Africans, pipe down. I'm fucking sick of your forwards, your prayers, your messages filled with pablum and hokum, your gotdamn candy coated sycophancy, basically, your general overall dick-riding. Stop it gotdamn it! Enough is enough!

Right after the election I got inundated with every image, every iconography under the sun as it relates to Ol' Boy (I can't even write the gotdamn name anymore). I was hyped just like everybody else. Then, it came to a point where I was disturbed by the cheese level. 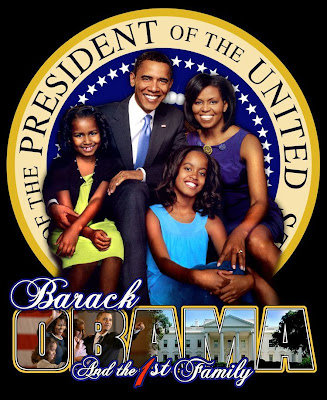 God, that photoshopping is the cheesiest shit in the world. That's some ghetto assed shit.

Then, it was the frequency in which I was seeing the shit. The extrapolation of this to shit everything. 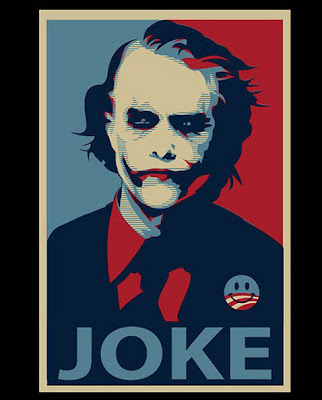 I was wonder when and if this shit would ever end. I'm deleting shit from everybody, if I THINK it's gonna mention Ol' Boy in the email, in any way, shape or form, it's getting deleted.

Then, of course, my mother sends me an email, and in the subject line I know it's about Ol' Boy. My mother and I have had a talk about the type of email I will and will not open or respond to, so I think I'm pretty safe.

Uncharacteristically optimistic, I open the email and this is what I see, attached to a prayer. 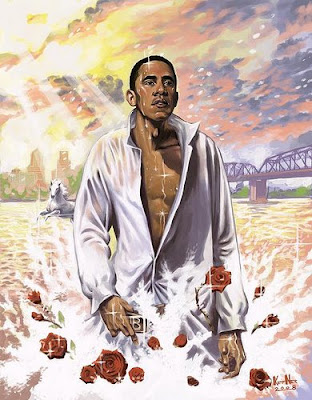 What type of pseudo-messianic bullshit is this? Man, fuck y'all for sending this shit to me. I don't need this in my life. I really don't. I'll hold my breath for single-payer healthcare until I open another Ol' Boy related email. Really, y'all can save that shit.

so does that mean you will or you won't put on your best and brightest colored gators, spend your rent money on gas, drive up to DC and have a cook out on the lawn with your peoples next week.

@AJ
Ummm...that would be a "no". But I would certainly welcome reports from the Negro-Q.

Zed: Please tell me your mama did not send you The O Jesus?

I agree though....I saw an O shot glass the other day. *Blink*

I second your comments while lmao! Enough is enough!

@Creole
I know you been gettin' this stuff too! Who hasn't? We are gonna kill Ol' Boy with our maniacal level of expectations.

@Sixy
Yes she did. I was like "Wow, mom". Do you see that white horse way in the background behind Ol' Boy? People are fucking crazy. I'm sure you saw an O shot glass too. I'm sick of Africans in the 'hood wearing head to toe O-phernalia. Yes, I see the hat. And the shirt. And the jacket. Also the button. And the do-rag. Give me a break.

@Anon
In a minute, everybody's gonna be suffering O fatigue. That's really what I'm afraid of.

Have you seen the one with the fingernails yet? Wait...I may have said too much. It might drive you over the edge. Forget my fingers typed that...

I'm fatigued TOO!!
But I'm still going to the Inauguration on Tuesday. :-)

I am done with anything inaugural...and Obama-ish... although I do have a ball to go to AND trekking out on the 20th...

I can't wait until all this is over. It's stressful just living in this area...now I've been pulled into the hype.

You really drove the disgusted point further by referring to him as "Ol' Boy" rather than Oboy. The similarity would have been too uncanny. So I agree that Ol' Boy was a much better handle for him versus Oboy. And based on that last photo your moms pushed we may need to start referring to the him as "Him." You know, how the Good Book usually capitalize Him when referring to Him. I'm just sayin'... Oboy what have we set ourselves up for?

And let the church say...AMEN!

I think I saw it all when I saw the Obama dildo....oh yea, and Obama Hennessy....lol

Okay, I thought I was the only one who hated that 'bytches get money' CD cover looking First Family pic.